This one’s for you Debbie!

Earlier this week I was enjoying reading the recent newsletter from A Quilter’s Table, and she talked a lot about her most recent finish which used a stitch and flip technique. Debbie went on to profile a number of other awesome stitch and flip quilts. And since people do a throwback Thursday thing on instagram, I thought I would share MY stitch and flip quilt.

It was purpose made for a show, and was successfully juried in. It hung in the first ever Modern section at the American Quilt Society’s Des Moines show in August 2013.

Since this quilt was waaaay before blogging I don’t have too many pictures, just the ones I submitted with my application. And this one: 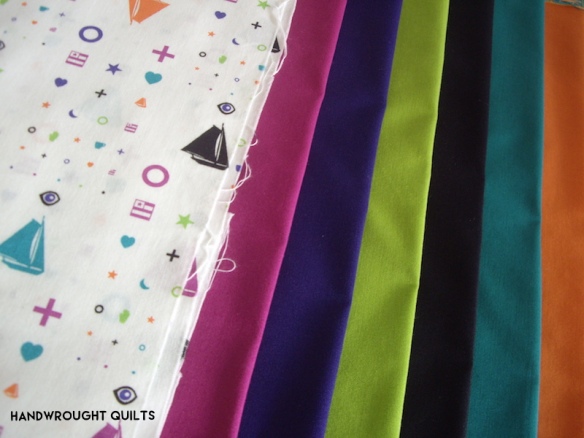 But since I do track all my fabric purchases I can tell you that I had two fat quarters of the focus fabric and the solids were: cerise, regal, lime, black, emerald, and kumquat (white not shown). I remember that I didn’t take the focus fabric to the store when I bought the white. If I had, I might have bought a slightly off white instead.

I was so pissed when I noticed the print was not pure white! I had cut everything and made all the stitch and flip triangles/squares already, so I abandoned my original plan and came up with this layout instead. It’s called regatta because of the colourful triangle flags everywhere and the on-point rectangular lozenge shapes remind me of boats. And there are boats in the print fabric.

The print fabric had reminded me of Yoshiko Jinzenji‘s work so I was trying to channel some of that as well as the stitch and flip from “Quilting Modern” by the fabulous Katie Pedersen and Jacquie Gering.

My husband had been encouraging me to be more deliberate with my backings and this was the first quilt where I really tried. Unfortunately the store only had 2.65m which wasn’t enough! So I scooped up more of the cerise, regal, lime, black, emerald, and kumquat and made it work.

This quilt is for SALE. Price reasonable. Never used. Email me for details.

Definitely no sewing here today. Boo. I think I’ve been grumpy this week because of not sewing. I feel guilting sewing when I have so many other things to do (the previously mentioned taxes and guild stuff). So I feel miserable about all of it and do none of it.

But it was the “get to know each other” potluck for softball tonight. I pulled out my favourite quilt to use as a picnic blanket, and it’s ALWAYS a conversation starter. I hang out with quilters so much I forget that quilting seems magical to non-sewers. So that’s a fun ego boost. 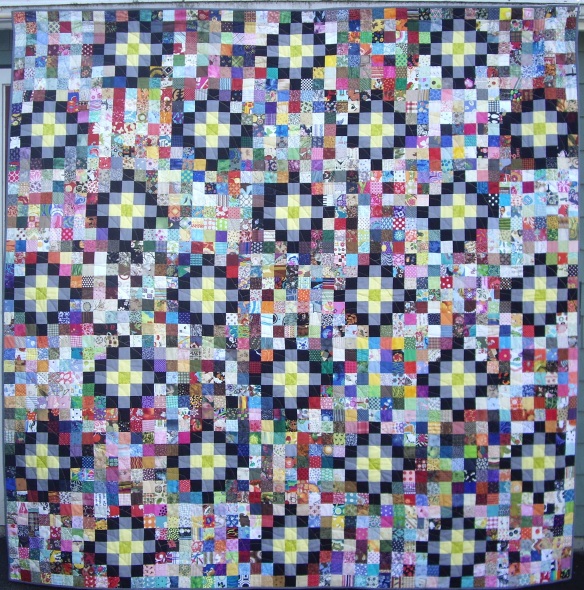 This one is from long before blog, it’s lifetime quilt #13 and was completed in March 2013. It contains 2,401 2.5″ squares. Of the 1,825 print squares there is only one duplicate. I swapped fabric with 34 people in 7 countries on 4 continents. The original pattern is called Steps to the Altar but this version is called “scrap vomit” by the wonderful Katy Jones.

Trash picture but at least it’s #tadone! #postcardsfromswedenquilt ☑️
Blocking a recently thrifted sunhat, and the first cherries of summer. I *LOVE* using my degree. #bfahonours #theatreproductionanddesign @yorkuniversity @theatreyorku
Good thing I like trimming #hst! I’m making this #postcardsfromswedenquilt for @trollbrothersquiltdesigns (if it doesn’t kill me first. The waste from the pattern is killing me.)
I finished this experiment and it came out great!